Your browser is out of date.

You are currently using Internet Explorer 7/8/9, which is not supported by our site. For the best experience, please use one of the latest browsers.

About Us
Home Back to Previous About Us

Pierce Steel Fabricators, Inc. is a family owned full service steel fabricator located in Western New York that traces its roots back to 1887. We specialize in delivering quality, custom fabrications on short lead times. Pierce Steel’s dedicated, experienced, hardworking and flexible team continually goes above and beyond to satisfy our customer’s needs.

Pierce Steel has a long history of exceeding customer requirements on challenging jobs with demanding schedules. We have in house engineering and design capabilities, including 3-D modeling. Our in house Certified Weld Inspector (CWI) and Quality Control system ensure that our products meet our customer’s specifications.

Thank you for taking the time to view our website. We look forward to working with you on any upcoming projects that you may have. 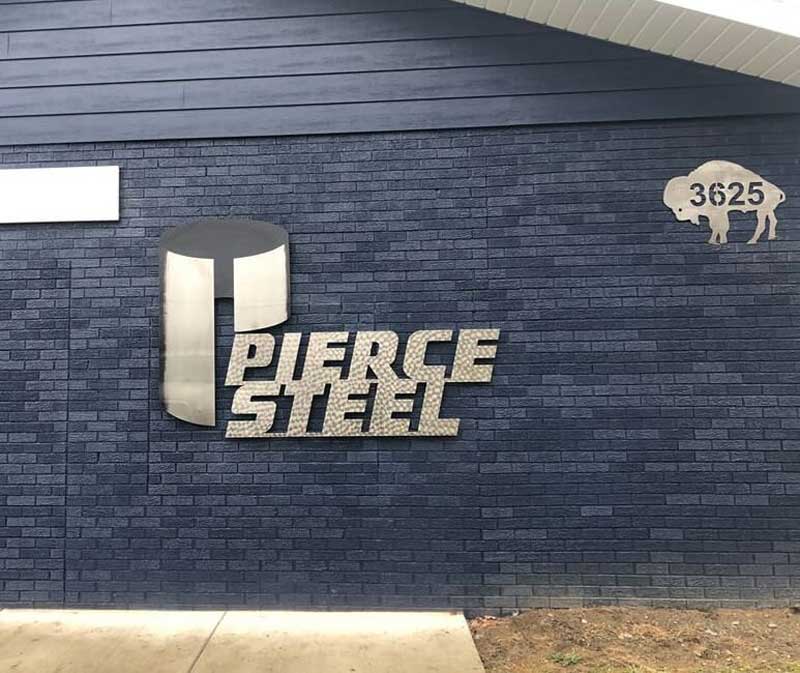 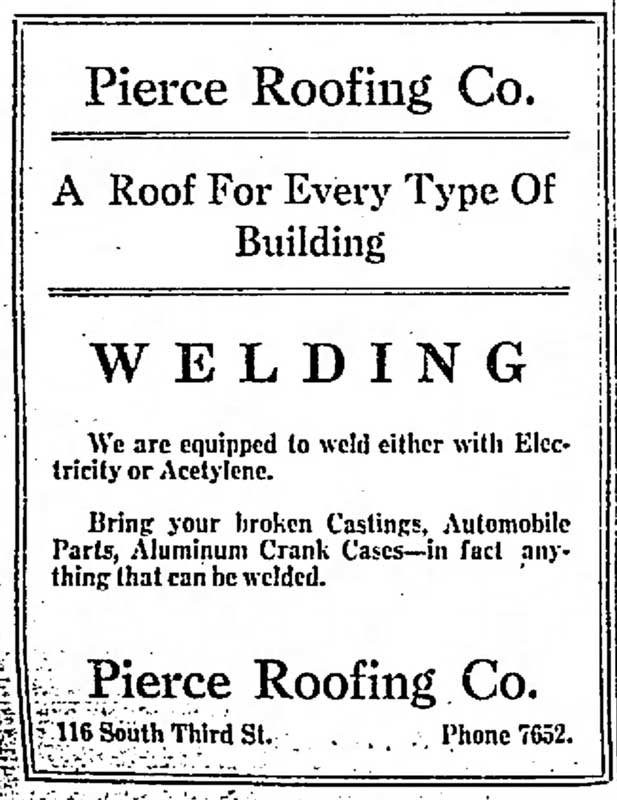 In 1887, O.W. Pierce founded the O.W. Pierce Company in Olean, NY to provide residential and commercial roofing and sheet metal products to the community. O.W. Pierce was a master tinsmith and industrial pioneer who also co-founded the Olean Tile Company in 1913. Over 131 years later, our company now known as Pierce Steel Fabricators continues to provide quality custom fabrications across North America and beyond.

In the 1920’s the company was sold to Charles Smith who expanded its service offerings and its customer base. The company’s name was changed to Pierce Roofing Company. The company did all types of roofing work, sheet metal work, ventilating systems and performed welding services. The company covered New York, Pennsylvania and eastern Ohio and had sales throughout the United States.

In 1967, the company was bought by a group of local businessmen including Milo Mazza and Joe DeRose. The name was changed to Pierce Steel Fabricators, Inc. Milo Mazza was named President and expanded the company’s heavy steel production capabilities. The company became known for its steel plate fabrication and welding abilities and produced several equipment baseplates and skids.

Joe’s son and Milo’s nephew, Mike DeRose, became President of the company in 2001. Under Mike’s leadership, the company’s 100-plus years of success continues. Today, much like it has been for over 130 years, Pierce Steel’s focus is on customer service. Pierce Steel provides a wide variety of custom fabricated products for a multitude of customers across several industries. Current customers include many Fortune 500 companies and government agencies including for Tesla Motors, Rolls Royce, Boeing, Caterpillar, NASA and the US Army.

1887 – O. W. Pierce Company is established. They specialize in sheet metal and roofing and employ about 35 people. They manufacture and contract all kinds of roofing, cornice, spouting, skylights and steel ceilings. They perform all types of sheet metal work including tin, copper, brass and sheet iron.

1920 – Company name is changed to Pierce Roofing Company. They specialize in Asphalt Shingles and Copper Eavestroughs.

1923 – Charles Smith and G.H. Hildebrant purchase the company from O.W. Pierce. Smith had worked for Pierce for 10 years at the time of the purchase and was the company’s vice president. Hildebrant came from New York City where he was working for one of the largest roofing companies in the country.

1930’s and 1940’s – The company continues to grow. They have about 30 employees and continue to focus on industrial and residential roofing. They manufacture light and heavy sheet metal equipment and do all kinds of acetylene and electric welding. They also do ventilation and dust collection projects for schools, churches, and factories. 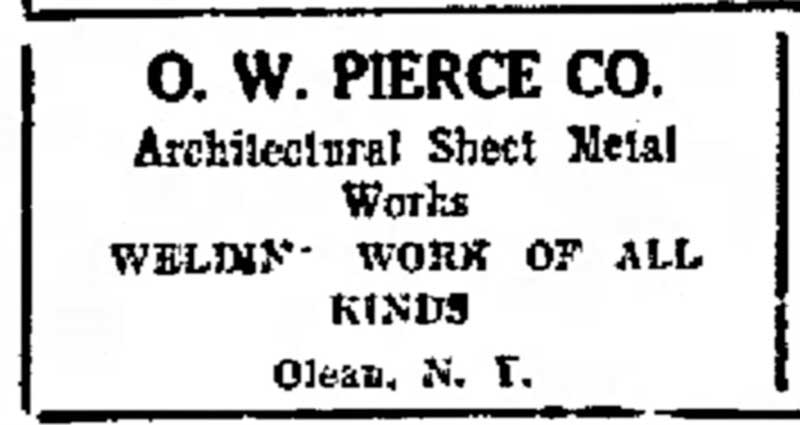 1967 - A group of 8 individuals, including Milo Mazza and Joe DeRose, combine to purchase Pierce Roofing Company from Donald L. Johnson.  The name is changed to Pierce Steel Fabricators, Inc. with a stated purpose to engage in the business of manufacturing, fabricating, and processing metal fabrications of every kind, nature and description.  Milo Mazza is named President of the new company, a position that he holds for the next 24 years.

1970’s - The company continues to grow and starts a search for a new location.  In July of 1972 the board agrees to move to its current location at 430 North 7th Street in Olean and enters into a leasing agreement with MKD Realty.  In 1975, an addition to the existing shop is built to house a new 12 ton overhead crane.

1980’s - Ownership of the company is consolidated under Joe DeRose.  In 1986, a second addition to the current plant is constructed.

2000’s - Mike DeRose takes over as principal owner and President in 2001.  A major shop renovation is undertaken to reorganize the shop and modernize equipment.  The company continues its legacy of providing quality custom fabrications to a variety of industries.

We have two locations with our corporate offices located in historic Olean, NY and a sales office located in Orchard Park, NY. Manufacturing is done in our 18,500 square foot Olean plant where we have a 15-ton crane, a state of the art computer-aided plasma cutting system, and a custom built prep-and-paint facility.Our hours of operation, maps, and contact information are as follows:

We’ll Build It. Get In Touch.